Call to Worship This was a responsive declaration of our faith and God's love, sacrifice and power ending with:
“Hosanna! God saves!
Blessed is the One who comes in God's name!”

Hymn TIS 333 "All glory, praise and honour," A song acknowledging God's kingship over all people, all through history and speaking of the thanks and praise given to Him by all.

In Kid's Time out Helen told of how she prepared for visitors and how, as a community, we make special times to celebrate the success of people, lining the street, to wave as the special people drive by.
In Jesus' day people would line the street and wave branches and call out. To stop the visitor being splattered with mud the people would lay down their cloaks.
On what has become Palm Sunday, people waved palm branches and called out:
"Blessed is the king who comes in the name of the Lord"

HYMN TIS 244 "Trotting through Jerusalem" A hymn revealing how the children greeting Jesus in Jerusalem had the right idea. The adults were expecting someone on a mighty horse to lead them into battle and were amazed to see such a quiet man. However the children saw the essence of Jesus, "Happy is he that comes in the name of the Lord!"

Prayer A prayer about the choices that confront us each day, and how some choices lead to light and others to darkness. Helen led the congregation, praying "May we learn from the choices of Jesus and embody compassion, justice, and inclusion in all we say and do. Amen."

Scripture Reading  Luke 19: 28 - 40 The story of Jesus directing his disciples to borrow a colt and the ride into Jerusalem, with the people lining up to "praise God joyfully with a loud voice for all the deeds of power they had seen." The Pharisees were not happy and told Jesus to tell the people to stop, to which he replied, "I tell you, if these were silent, the stones would shout out."

Reflection. Unfortunately, I was unable to attend the service but from Helen's short notes it appears the reflection focussed on the reading, and Jesus' claim to be King. An odd sort of king: an unemployed, homeless Rabbi who showed his authority during the cleansing of the temple but whose followers were a bunch of country bumpkins. The reading shows how the event we remember on Palm Sunday was a deliberately, politically contrived event by Jesus to make His claim as King. This was Jesus making a statement.
Later we read of Pilate ask a half dead Jesus, "Are you the king of the Jews?" and later the sign on the Cross: "King of the Jews" 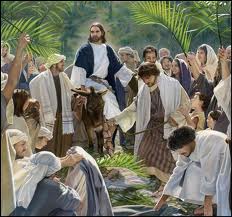 When Jesus entered Jerusalem as King it was not as the King we want. He overturned all our expectations and definitions of God, challenging us to see things in a different way.
For myself, I am aware of people, including myself, wanting a God who dispenses with the cruel and nasty people and things on earth. It would be really nice if he would be the God who gets rid of raging ear aches, like the one I have at the moment. But the message of Palm Sunday and Easter to follow, is that He isn't that sort of King.

Prayer. "Lord Jesus, on this Sunday you entered Jerusalem as the king we didn't expect, ruler of a kingdom we found hard to understand.
Enter into our city, we pray.
Show us the way, that we might follow you and walk with you down your narrow way of the cross. May we be citizens of your kingdom, recipients of your salvation. And sharers in your glory.”

Hymn TIS 348 vv1,2,5 "Ride on, ride on in majesty" ..."in lowly pomp ride on to die; bow your meek head to mortal pain, then take, O God, your power and reign!"
There followed the Freewill offering and the Prayers for others which included a report by Jack on the Presbytery meeting.

Hymn TIS 456 vv1,4 "Your hand, O God has guided" The victory will be won..." and then by all creation, your name shall be adored, and this shall be our anthem: “one church, one faith, one Lord.” Sounds like paradise.

Blessing
“Go in peace to love and serve the Lord.
And may God give you courage for the journey.”