Before I begin the blog proper, I should say this is a week late but since I couldn't attend the service on Sunday I wanted to give people an idea of the way things are going.


Another thing you must know is that between Grahame's playing and the congregation's singing, this was made a special service even before John and Peter made their very worthy contributions.


What if? What if the stranger in the pew is really Someone Test Driving our church to see how we are?


What if God really did appear in a dream to the couple in the back telling them that you and your church could be trusted to care. What if we really do entertain Angels unawares?

Hymn TIS 457 "The Church's one foundation" - is Jesus Christ our Lord. If we could keep this in front of our eyes at all times, many problems would never arise.


Lynelle then led the Anniversary choir in "Joyful, Joyful", an offering that was very well received and which lifted the hearts of many people present.


John led us acknowledging our need to be present and accept God's invitation to be like John Newton: once blind but now able to see. For this he gave thanks.

A Prayer of Confession


John confessed for us our need for special attention and then we joined in, asking forgiveness for our stupid pride. We then asked forgiveness for forgetting that we are God's servants, here to tend to the needs of others. This opportunity to confess together each week surely lightens our load.


Remembering that those who are exalted will be humbled, and those who humble themselves will be exalted, we were further reminded that, in the name of Jesus Christ, we are forgiven. Thanks be to God.


The peace of Christ be with you all. And also with you. And with that, we offered the hand of peace to each other.

God, here we are, offering in hand, standing with faith that what we offer to you matters to the work of the kingdom...Most Holy God, we ask that you use these gifts to increase your kingdom, and to increase our faith in your work. Amen.

Then as part of our Anniversary services, Rev. Peter Oliver took the rest of the service.


At the beginning of the service, when Elaine introduced Peter, she said he and his wife had been role models. She remembered how he had woven movies into him sermons making them more relevant and how they had started off nurture group which still runs every second week. Peter also spoke of his memories as a young minister.


Alan read from an account of an interview with Jean McKinnon who was with MRUC from 1983-85 and again in 1989. She remembered that she was somewhat reticent to come to MRUC because she was a "sleeves-rolled-up" kind of girl but that her memories of her time with MR were great. Alan had a bit of trouble, becoming a little choked up with the reading, indicating the enormous affection for Jean that still exists at MR. There were many memories, including the good exercise she thought she gained from the vibration of the organ when played by Grahame, adding that MR has the best acoustics, ever. She is remembered as a grandmother figure who wore her faith on her sleeve and who was non-judgmental in her treatment of others, saying: Thank God we have the faith and love and obedience which links us together.

Peter then spoke again saying how glad he was to be amongst us again. He remembered the mistakes he made at the beginning, one being that when he visited a member of the congregation with an elder, he rearranged the chairs to suit the positions suggested in his counselling training, only to realise those chairs were NEVER moved.


He then, remembering his ordination, recalled despite having powerful mentors in the ministry, that he had asked lay people in the congregation to be involved in the laying on of hands. He now supervises ministers to prepare them for being able to relate to their congregations and deal with the very difficult situations which can arise: splits in the leadership; difficult church councils; people arriving on your doorstep. 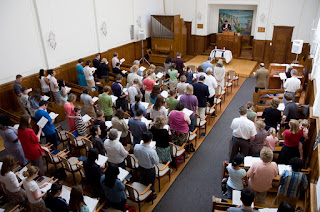 He expressed his hope that this celebration would reinforce an even deeper sense of clergy and lay people committed to faithfully serve the risen Christ together. Peter continued speaking about his experiences as a minister, for which there is not space here but left us with a very important thought: My prayer for you and me is that our optimism is being more and more grounded in Christ rather than our own efforts and that celebrations will reflect that deep thankfulness for the one who accompanies us on this journey. Amen.

Hymn TIS 650 "Brother and sister, let me serve you." This should be our first thought and prayer because, in serving each other, we are serving our Lord.

Prayers of the People


Jack led us, saying that the crux of religion is that God is love: a love that can conquer anything. He prayed for aid in keeping the great commandments. He asked for comfort for those with health problems; for Joan who has been in hospital for some time and for others who have ongoing health issues. He prayed for those suffering because of the drought and the unemployed and carers who are burnt out. May they all be granted the peace that passes all understanding. Then we joined in the Lord's Prayer.

Hymn TIS 442 "All praise to our redeeming Lord" No matter how often we sing something like this, we secretly think anything that looks like success is down to us. Is God running the World or not?

Peter then pronounced the blessing: May the Grace of our Lord Jesus Christ and the love of God and the fellowship of the Holy Spirit be with you always. Amen.

Then together we blessed each other: Now unto him who is able to keep you ...