The heading for today's service was "Shone like the Sun" and we were called to worship with the words: "Transfigured by light, Jesus was changed. James, John and Peter saw it and were changed. Come away to the mountaintop; be still, be yourself, be who God intends you to be. Be changed."

Of course there were other perspectives which were explored but the one that evoked the most unambiguous response in me was the image of God's holiness as untarnished, light: the Shekinah: God is present.

This shining presence was the focus of all three Bible Readings: the first from Exodus 24.12-18, where God appears to Moses in the cloud which was necessary to cover that glory so that Moses would survive. The next was from 2 Peter 1.16-21 referring to God's presence as Jesus was proclaimed the "Beloved". The last reading was from Matthew 17: 1-9 which describes how the  experience of God's presence manifested itself to Peter, James and John on the Mount of Transfiguration. 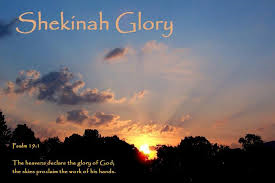 On all these occasions the experience for those whom it touched was well out of anything that they could easily cope with. When God is present it is unmistakable. It cannot be ignored. There must be an authentic response.


The hymns, too, reflected the same theme, with the first, Hymn 102, while not mentioning light, spoke of the formless nature of God, surging where it will. Hymn 675 was more specific, praying for God's radiant light of love to shine on us, while Hymn 602 also linked God's love with his light, asking that the blaze of God's light will restore the light we give to others. Hymn 268 continued the exuberant mood speaking of the joy that God's light brings with it and then Hymn 780 was a prayer bringing us to the logical conclusion that the light that we had thought about and rejoiced in through the service would become ours and show in our eyes. Amen to that.


When John delivered his sermon, the point that struck me was that when Jesus was declared the "Beloved", the significance was that we are to follow him. Jesus' light shone brightly and unmistakably.


In Jesus we are given more than a set of rules, we are offered a relationship with the individual true light,


I don't know if John said this, but I heard: Jesus’ light is such that we don't even have to open our eyes. That light is such that it penetrates out hearts and minds, even when our eyes are shut. That penetrating light assures us of God's love and that he is calling us to a new way of living. The question is: Do we want to see?

At the conclusion of the service with the events which are recorded as having taken plan on the Mount of Transfiguration in mind, we were sent forth:

​Let us not linger too long on this mountaintop. Go and bear God’s light to a world that longs for peace. May God our Creator, Redeemer, and Comforter walk with us now and forevermore. May the blessing of that same God almighty, the Father, the Son, and the Holy Spirit, be upon you and remain with you always. Amen.