Call to Worship:  A Woman of no Distinction


This was a moving passage which highlighted the need of the woman at the well, and of all of us, to be seen as the people we are and valued for that. It is only the creator who can do that fully, but as people who have given ourselves to the service of others, we should do everything we can to let people know that they are valued - just as they are. This passage highlighted the need to share the love that has made us closer to what we should be, with others.


"lay down, O weary one, lay down your head upon my breast."  What an invitation! - but sometimes we are just far too independent and proud to take it up. Show a little humility and admit you need help.


Prayer of Confession: Rowena confessed for us our doubts and fears: our inability to let go: our inability to take our troubles and fears to the Source of all Wisdom. We don't know how that works, so we turn to the world's wisdom. As a result we hurt others: we show contempt for people who we don't understand. Rowena asked that that rock-like facade we show the world be broken open and that we should offer ourselves to be forgiven. Amen


The source of living, life-giving water offers forgiveness. All we need is to humbly accept it. Accepting forgiveness can be very difficult.


We have been loved in overwhelming abundance and so we respond in kind. We complain about our lack or about how much people keep asking of us. Come on! Look at all you have.


Time with the Children:


Rowena use this time to show how we judge others and reject them for the most superfluous reasons. Look past the superfluous- see the real people. Guess what! We are all just people.


Rowena spoke to us about Jesus' conversation with the Samaritan women at the well. Jesus often spoke to the multitudes but at other times to individuals and this conversation is the longest recorded on a one-to-one basis. The Jews despised the Samaritans and avoided them. This woman was avoided by her own community but here is Jesus, a Jew, talking with her - at length - about very personal issues. He was ready to ignore the rules to offer grace. (Notice, he didn't say she had to become a Jew, he simply offered her living water as a free gift.) 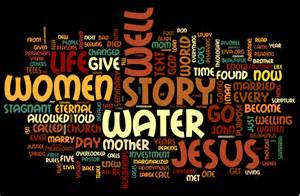 And in speaking to her, he revealed more of himself and her understanding of him increased. A lesson for us all: the more we spend time with that enlivening presence, the more we will understand him and the gift we are offered.


And the practical message: are we willing to be hospitable, in any way we can, to the lonely, the rejected, the people who are different from us?


An invitation that is hard to resist. A thought that occurred to me was about  the "facade" Rowena referred to earlier. We really spend a lot of time pretending to the world about what "top" people we are. But why do we try to do that with God? Especially since he calls us - just as we are!


Rowena prayed that having been refreshed by the Living Word, we should turn our attention to the world around us: we should be sensitive to the needs of those who hunger and thirst spiritually or physically. She prayed for those with health issues, naming people in our own community, and for anyone in crisis, including those whose crisis is a joyful one. She prayed for those who are looking for that living water but don't know where to find it, that they will know God's presence and through that, their sense of purpose. We then joined in The Lord's Prayer.


We're sent forth to offer that living water to the world.


Now unto him who is able to keep,


Able to keep you from falling. And to present you faultless


Before the presence of his glory With exceeding joy,


To the only wise a God our Saviour, Be glory and majesty,


Dominion and power, Both now and ever. Amen