Hymns:  Prayer of Praise and Thanksgiving


Sung: TIS Hymn 102 Praise to the living Lord, all praise to his name.


Hymn TIS 188 Where the wide sky rolls down


Hymn TIS 454 Worship the Lord in the beauty of holiness

Benediction Hymn TIS 780 May light come into your eyes.


I led the service today and, after studying the lectionary readings, the theme that emerged was about letting God be seen.


In the Acts reading we hear of Paul finding the Athenians worshipping many gods in the form of statues, except that one was to the "unknown god" and acknowledged that "we too are his offspring". Paul realised that God had made himself to be seen by the Athenians. That reminded me that the Church does not own God and nor do Christians. That God can appear to whoever God chooses, regardless of people, place, education or culture.


That made me realise that we should not assume that people know nothing about God just because they don't speak the "right" words or think highly of the Church.


Often we can see that God is speaking to people through their hospitality, their kindness, their generosity, their encouragement of others.


Paul saw this though the inscriptions on the statue, so instead of berating the Athenians for what they were doing that was wrong, he acknowledged and encouraged their search for the truth.


Clearly, some among them had experienced that enlivening presence that we all know, which convinces us of the existence of an everlasting God.


We should follow that example. Encourage that which is leading to light. It may seem beyond us but we have the most excellent template upon which to mould ourselves - Jesus of Nazareth.


In letting God be seen through ourselves, I realised that there is huge issue, especially for those of us who are getting older and acquiring medical problems. We should be constantly giving thanks for what is good in our lives.


Life is what it is, with everything that comes with it, but there is so much to be thankful for.


A friend taught before his retirement, at a "disadvantaged school". He taught kids whose first language was not English and kids who simply had trouble with reading and writing. Their home backgrounds were not rich in material things, so they could have easily developed a victim mentality but God wouldn't let that happen. He pointed out that in having a home, clothes, food, education and available medical help put them in the top 6% of the world's population. 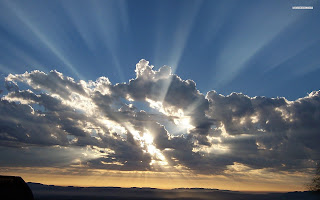 We all have troubles, but we all have much to be grateful for - comfortable homes, healthy food, friends, family and community help.


Our lives will be that much richer if we focus on that.


And those people who know we are Christians will see God in that instead of seeing those who profess to be God's people grumbling about their lot. What must they think about that?


We have so much to thank God for.  Which is just what the psalmist did:


let the sound of his praise be heard,


who has kept us among the living,


and has not let our feet slip.


Let that God be seen.