standard and praised God for forgiveness freely offered. Sometimes as we make our way through our lives, we fail to acknowledge that we have not loved our neighbour as Jesus loved us. We think we are as good as the next person but fail to acknowledge that we are simply broken people and are failing that sacrificial standard set by Jesus.
but to save the world through him. We humbly accepted that release with:
of our own brokenness and need for healing and for forgiveness. 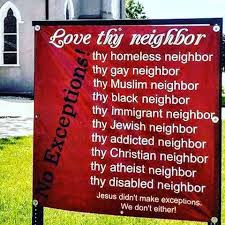 excelling” Another
reminder that every time we start congratulating ourselves on how wonderful we are, God wants us to open ourselves to be more than we can ever be through our own strength.
“By this shall all men know” as it is in the NRSV. “By this everyone will know”.
Posted by Margaret at 04:23