Was John Wesley "The man who saved England"?

Late in the year 2019 and before the arrival of the disruption to life in most countries with the Covid 19 Pandemic early in 2020, a small group of our Marsden Road church members had been involved in a study of a book called “John Wesley for the 21st Century” by John O. Gooch.  The Rev. John was asked if the Marsden Road Congregation could hold a series of services and further studies, a family tea and other “old fashioned traditional” events to remind us of the importance of community and spirituality of people who claim to live as Christians. This was all planned for August 2020 as “Wesley Weeks” and I suppose you could say that there was a yearning for the Wesley way of the old Methodist Churches and perhaps a longing and a social need for a new Revival. 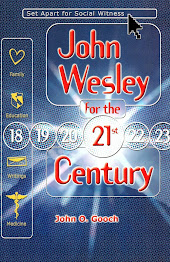 Despite the strict health rules and the constraints about meetings and gatherings as measures to keep people in Australia as safe as possible, it can be said that, at Marsden Road Church we are all living with these constraints as well as possible.  So we are proceeding with the “Wesley Weeks” plans with a few necessary changes.  The Rev. John is leading five more weekly studies for those who are able to attend via “Zoom” and he will be presenting specially focused sermons about John Wesley and some of his social work, causes and beliefs.  On Sunday the 2nd August the Rev. John’s sermon focused on the life and work of the Rev. John Wesley and his brother Charles, with special reference to John’s particular interest in science, which was the topic of the study via Zoom on the previous Wednesday evening. In this sermon, the Rev. John wrote; “An insatiable reader, Wesley read scientific works throughout his life, often from the back of his horse.” … “From his own reading and the advice of others, he developed short lists of scientific works for his correspondents, schools, and lay preachers. These collections included older works by John Ray, Cotton Mather, and Jonathan Edwards as well as current works by Benjamin Franklin, Charles Bonnet, John Hutchinson, and Oliver Goldsmith. Wesley followed the debates that swirled around the various interpretations of Newton's ideas.”

As usual the sermons are available in full on the Marsden Road Church website each week, so you can read them there.  There is also a wealth of information on the internet in the form of countless history articles and many excellent YouTube videos, so I am wondering what path can we follow for the weekly blogs?

John Wesley certainly spoke up and recorded his views clearly in all his writings and 40,000 sermons which he is said to have preached - and his brother Charles certainly gave us wonderful hymns to sing in praise of God.  I wonder who among us doesn’t take a deep breath and approach a Charles Wesley hymn with enthusiasm and a degree of thoughtfulness?

Having had only one attempt to ride a horse and having to retreat to have a long soak in a hot bath because I could barely walk; I certainly admire John Wesley’s determination and strength when I read that in all he travelled on horseback for about 400,000 kilometres and used the time often to study and read.  Today’s piece of trivia is the note I saw in one article, that said John Wesley had “Ridden his horse to the moon.”

I became interested in the Wesley family as a whole many years ago now, when I became deeply involved in family history and I read notes written by ancestors who had known my maternal GGG grandfather the Rev. John Mayor personally.  I was fascinated to learn that the Methodist Church began in the heart of the Anglican Church and that some of my ancestors, including the father of the Rev. John Mayor were buried in the non-conformist Bunhill Fields Cemetery in London with the likes of Susanna Wesley, the mother of John and Charles Wesley and many of the early Methodist ministers and followers.

where he served as Minister for 45 years

The Rev. John Mayor entered Worcester College, Oxford in 1774 and was ordained Deacon there in 1778.  He began his ministry at Shawbury in Shropshire in June 1781 after what seems to have been a period of unrest and youthful enthusiasm - perhaps in an area where the “Methodist” Anglicans were not as well received.  He wrote that he was ordained as a Priest in September 1779 “Where I had some blessed seals to my ministry and violent opposition which ended in my quitting the curacy in a years time, Michaelmas 1780.”  It has been written by his family that the Rev. John Mayor was a great preacher and he was one of John Wesley's well known adherents and he became a leader in the Nonconformist Revival.  His niece wrote of him; “He was stirring up the Shrewsbury neighbourhood when Wesley was busy in Devon.”  In his will there is a bequest to his son of “my Psalter” and another book which were given to him by John Newton.  I feel this and some other more definite clues, support the stories of his long friendships and involvement with people who had been great workers and advocates for the “Wesley’s Revival”.

The World Book Encyclopaedia records; “Methodism originated as a movement with groups of students at Oxford University in the late 1720's.  They helped each other to be disciplined and methodical in their study, spiritual devotions and practical good works.”  It has been well recorded that John Wesley and his brother Charles preached in the open air and the crowds were very large as they taught their listeners about “personal faith and practical good” and I believe Oxford University students continued to nurture the future generations of students to join in the revival.  When John and Charles Wesley realised that they and the few enthusiastic clergy working with them could not do all the work and provide all the spiritual support needed; John Wesley began, from 1739 on, to evaluate and approve men who had not been ordained as “local preachers” - and this proved to one of the catalysts for the growth of Methodism.

Modern History study for the Leaving Certificate in the 1950’s began with the French Revolution and ended with the causes of World War 1.  I was captivated by all History, but then, I was fortunate that a wonderful teacher made it into a fascinating worldwide saga about the ways the “age of enlightenment” and the “twilight of princes” evolved; with reason replacing God as an explanation of the world.  With these changed religious and philosophical thoughts, more popular and nonspiritual art, inventions that led to innovations in trade, transport and technology and the huge social changes of the ensuing Industrial Revolution, came the first stirrings of the age of revolution of which the French Revolution in 1789 was only a part.

The first Industrial Revolution began in Britain after 1750 because the country was prepared financially and already had solid financial institutions like a central bank in place to finance the new factories, and the development of new technologies to work with iron and steam power and other kinds of mass production.  The economic strength of Britain was sured-up through high taxes which were also collected from the almost boundless British Empire.  In the majority of circumstances, with little regard for the workers - these rapid changes were made to the culture and life of people who had worked on farms and in their homes and were forced to move into new industrial towns and big cities in order to work long hours for low wages and endure poor housing.  However, a few mills belonged to benevolent men who provided housing, schools and medical care.  The New Lanark Mill even had a school, a church and a Co-operative Store where prices were fair and the workers benefited from any profits.  I wonder if the owners knew John Wesley?  I am certainly sure they knew God! 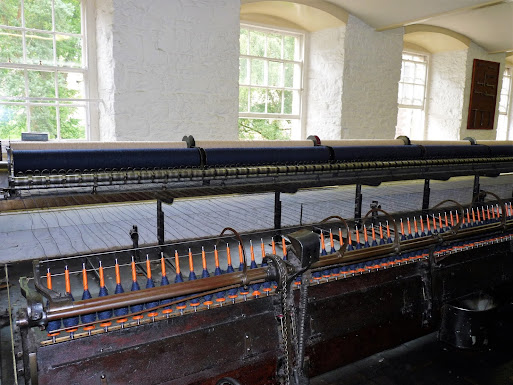 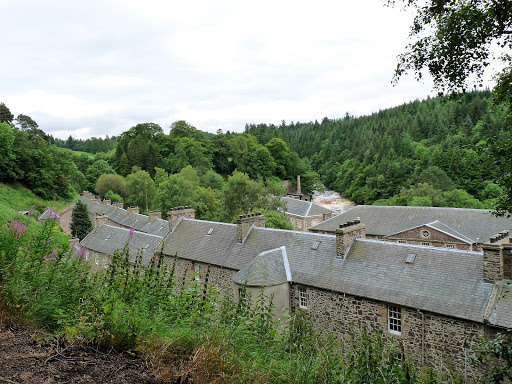 The ‘upper classes’ went ahead with the building of big new factories with expensive machines that could make even bigger fortunes for them as they exploited the poor British workers and foreign growers of spices, cotton and rich silk fabrics and every kind of exotic thing from the Empire on which it was claimed “the sun never sets.”

Is it any wonder that the “lower classes” were beginning to show dissatisfaction with their miserable lot and there were rumblings of Revolution in Britain as well as in most of Europe?  John Wesley and his Revivalists taught and encouraged their followers about the love of God, who could bring a better world for everyone if only everyone would live the Christian life.

There are those who believe that John Wesley and his Methodist Revivalists saved Britain from its own violent revolution by doing their best to bring hope into a seemingly hopeless world by their spiritual and social revival, education of the poor, the provision of food, clothing, fuel, medical help, tools and the basic needs of life in those difficult times.  They also clothed and fed prisoners and cared for the aged and helpless in need.  At Oxford, John Wesley had studied basic medicine and first aid.  So in 1746 he set up the first free medical dispensary for the poor.  His passion for helping the poor and needy was lived out by the Wesleys and their followers.  John Wesley wrote and “lived” this statement; “We give to God not by giving it to the church, but by giving it to the poor.”  He personally helped in many ways and he gave all of his own money from his prolific writing to help the poor; living only on his stipend of ₤28 per year.

https://www.youtube.com/watch?v=UwjdD_JbOok  “John Wesley the Man who saved England.”  If you have access to a computer, tablet or smartphone, and a spare half hour, you might find this YouTube video very interesting.  The speaker is Sydney Adventist Pastor Gary Kent.

I have “reflected” for long enough today, so I will have to catch up with the topic of slavery, that was the focus of the Rev. John’s service on Sunday 9th August, during the next week.