The Responsibility of Hearing

The Rev. John called his Reflection/Sermon on Sunday 12th July, “The Responsibility of Hearing” and this seems to be a good way of looking at and interpreting the parables from the Bible and their relevance in the 21st Century; which may offer different paths of understanding to the culture and lives of the original hearers of these lessons presented by Jesus in the 1st Century.  After giving a brief summary of the Parable of the Sower, the Rev. John said; “Not all of the seed fell on poor soil or poorly prepared ground. Some fell on good ground and brought forth fruit.  In comparing this kind of soil to the hearer, Jesus says it is a person who hears the word, understands, and responds to that same word.  Most of us hear, but it is important that we understand and respond in both word and action also.  How important it is for each of us to know our own hearts and our response to the gospel of Jesus?”

For those of us of a mature age, perhaps there is sometimes a sigh of resignation when we realise that the theme of the day for our church service is one of the well-known parables from the Bible that we have been hearing since we first listened to them with the wonder of a “Once upon a time” story in Sunday School.

Since that time we have probably heard dozens of interpretations of each parable at different stages of our life and I suggest that our reactions may have changed with our understanding as a child, a teenager, a young adult, a parent or a more mature person.  Who among us could not, as a child and a young person, see why the younger brother of the Prodigal son was a bit miffed about the fuss and the welcome given to his returning brother?  Then as a parent, I must admit that I could see that the father might have made things easier for his younger son if he had included him in the whole situation and encouraged his participation in the planning and the execution of the festivities.

In my life experience, I have found that a good teacher does not ram facts down your throat, but presents the learner with the “tools” to listen, understand, interpret and research how the information presented can help them to embrace the “big picture” and discover the truth for themselves.   As a teacher, Jesus was surely telling his stories to allow involvement and questioning among his listeners and perhaps there were questions and discussions among the people who flocked to hear these “lessons”.

In relation to The Parable of the Sower - or as the Rev. John suggested it could be called - the Parable of the soils; “It is the reaction of the soils and of the hearers, that makes the difference. He said; “This is the important part of the parable. The sower must possess the seed which is clearly the word of God … We need to first experience the truth of the gospel in our own lives before we can share it with others.”

I read an observation made by  M. – J. Lagrange, who was an early 20th Century scholar of the New Testament, in which he explained that “the parable” is not always clear, because “The purpose of a parable is to strike the imagination, to pique the curiosity, to make the listener reflect and work to arrive at the meaning, but only so that the lesson will be more deeply engraved on the mind.”  I like this idea because we need to have a way of looking into the stories and finding that 21st Century relevance we are seeking.  Perhaps this is why I sometimes like to look at the possible meanings of any of the parables from a different point of view.

In my reflections on the Parable of the Sower I have come to sometimes random conclusions like; It is perhaps part of God’s great plan that the birds who swoop down and eat the seed that the sower has carelessly cast on paths or the hard ground that will not sustain growth are really in need of that seed to survive. Just last week I was overcome with joy when a small group of sparrows swooped down onto the path I was walking.  They trusted me and landed to retrieve some food from the debris broken off the trees by the wind.  I can’t remember when I last locally encountered sparrows or blue wrens, although they were here in abundance 40 years ago.  Surely God would be as thrilled as I was to know that his birds that are struggling could find some food.

So if as it is implied in Jesus' story, the Word of God is the seed, and we are the soil, doesn’t that mean that those people who may have been carelessly planted among rocks or weeds may need our help to hear God’s word, or to live a life that reflects God’s Love.  In our lives we have seen and heard of many wonderful stories and miracles that have brought Faith and Trust and new life to people who may have been on the wrong road with the wrong kind of friends who may have been harmful weeds or thorns.

I had an uncle who was a Policeman in the area where my brothers and I grew up and one day he came to my father and said; “You should stop your boys from keeping company with (let’s call him) “Fred” because he has been seen in the company of known trouble-makers.”  Although Fred may not have been the first choice as a friend for his sons, my father told them to be careful; but he told his brother that he was pleased that his sons could recognise the good in Fred  -  and he said that he thought his boys could have a very positive influence on  Fred’s life.  Fred’s father had died as a soldier in WW11 and the good people of Legacy and others were trying to help his widow - and set his daughter and young son on the right path.  My brothers ignored the dubious “new” friends that had come into Fred’s life as he left school at 15 and took a job in the Homebush Abattoirs.  A combination of too much money for piece work with an adult wage, together with a 3.00 pm finish to his working day probably contributed to his falling in with the wrong crowd.

My brothers continued their friendship with Fred who was often to be found sitting around our house and sharing family life with other “safe” friends.  After my younger brother died a few years ago, another friend told me that he believed that Fred had benefited greatly from having a stable and loyal friend like my brother.  Tragically, when Fred was 19 he was killed in a motor cycle accident – I have always been glad that he had been part of our family and protected from “the thorns” of life by my brothers and their friends.

I can’t help seeing all gardens as places of hope - I feel we must always look for tiny “plants” and “people at risk” and I thank God for all the wonderful people who spend their lives improving the soil in the lives of those who have problems in their way. 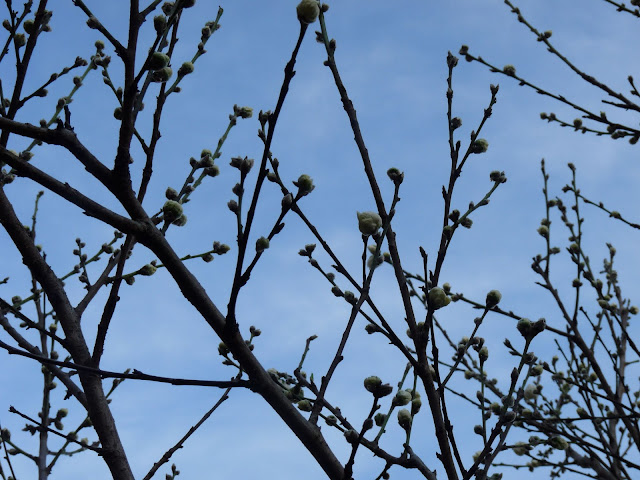 Last week I sat on our back steps in the warm winter sunshine and looked around at the blue cloudless sky.  I saw the elegant bare branches of the peach blossom trees with their promise of spring buds beginning to swell; ready to burst into September flowers of exquisite beauty. 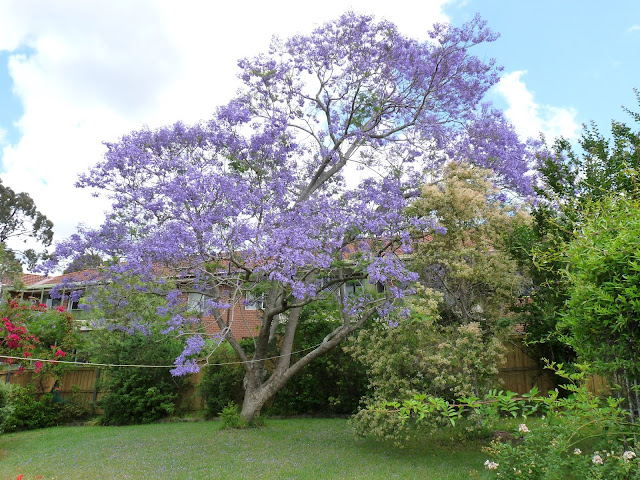 The mighty jacaranda tree with slightly yellowing leaves was giving an early sign of the time in November when the almost bare silver branches will be laden with purple flowers that will begin to fall gently and lay down a purple carpet beneath the tree canopy and beyond. 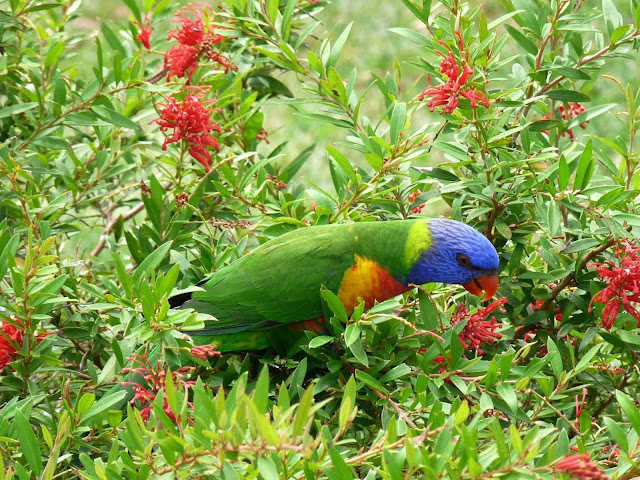 And the Lorikeets will return to enjoy the abundance of flowers on the Grevillia in the rockery during the summer months.  We certainly need to look forward in hope as 2020 continues on its dreary and worrying way! 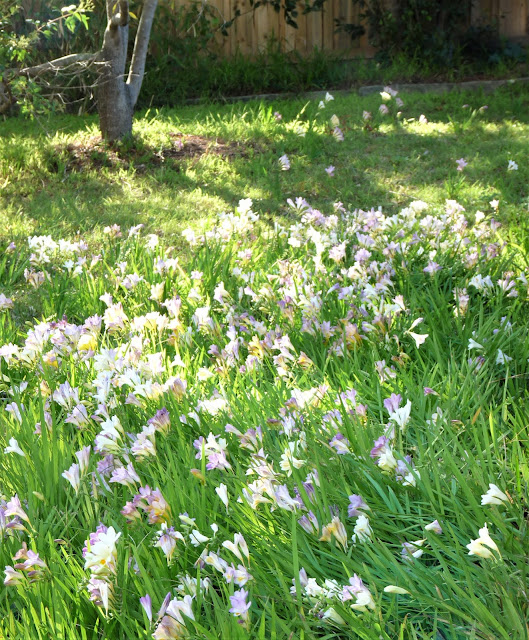 As I looked around, I knew that the grass really needed to be mowed, but that must now wait until spring delivers the riot of wild freesias which will spread their joy throughout our back yard. Yes – those freesias really know how to bloom where they were planted over many years by the vagaries of the wind.

It is wonderful to share with you the news that Margaret is finally home from hospital and rehab and she sounded so much better and brighter when I spoke to her yesterday.