Over the past month we have learned a lot about the Rev. John Wesley and last week our Rev. John highlighted his conservatism and his loyalty to King and Country.  This week the Rev John spoke in his sermon of Wesley’s Thoughts of War.  In his book “John Wesley for the 21st Century” John O’Gooch wrote; “John Wesley was not fond of war.  He did not leap to the notion that we have to support the King in time of war, no matter what.”   O’Gooch stressed that Wesley tended to blame both sides equally in war – including the American War of Independence - certainly a battle of his own time. Gooch also stated; “And yet Wesley was not a Pacifist.  He thought war was foolish and wasteful and there should be better ways of solving international disputes.”

I’m sure there would be no argument about this from any ordinary, thinking and fair minded person some almost 230 years after his death.  While a Chaplain in New Guinea in 1943 my father wrote home in a letter; “What a mad futile business war is!”

In 21st Century Australia when we think of war most of us will think about those wars that we Australians, our parents or our grandparents and for some even their Great Grandparents, took part in at the end of the 19th Century and during the 20th Century.   “Our dead are never dead to us, until we have forgotten them” is a quote attributed to George Elliot the author, who died in 1888.  We older people have probably already passed on our personal memories and thoughts about war in some way to the following generations.  I have already written about my father and others in World War 11 as part of my Family’s History and also shared some of those stories about World War 11 with the readers of Margaret’s Blog.

For the centenary of the Great War of 1914-1918 I was inspired to write a book to share the memories of my husband’s grandfather’s family.   I called the book, “One Australian Family’s War 1914-1918 and beyond.”  My husband’s Grandfather died on the Western Front in January 1917 and another brother left to serve at the front just two weeks after his brother’s death.  Their younger brother had already died from wounds the day after the Gallipoli landing.  One of their first cousins died in May 1915 and his body was never identified.  He is one of 4223 Australians commemorated on the Lone Pine Memorial at Gallipoli, along with another cousin who died unidentified at the Battle of Lone Pine in August 1915.  A third cousin who died in July 1916 was one of the Lost Soldiers of Fromelles and his identification in 2012 brought large numbers of their scattered families together to share our family history more widely and discover new family ties and friends. This also brought about amazing links between our families and some wonderful French people from the towns of Fromelles and Villers-Bretteneaux and the present day children of the schools in those towns who have carried on the traditions of previous generations from their towns and “Always Remembered Australia” and our soldiers.  Think bush fires!  Do you remember all the “good news” stories after our summer bush-fires when these and other French communities once again made generous donations to our Australian country people to care for our native animals and repair our schools. 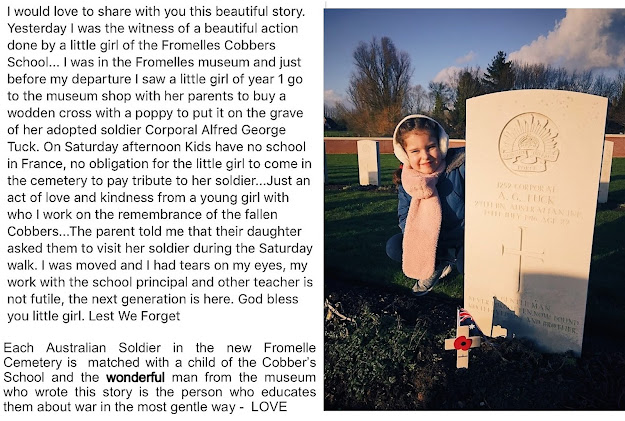 In all eight first cousins of my husband’s grandfather, brother and three cousins, who died in France and Turkey also left Australia to fight for “the Empire” on the other side of the world.   This story is not unique, but is a heartbreaking reminder to us all of the horror, stupidity and heartbreak of war.  However, as a Christian, it helps me to believe that even in the worst possible circumstances we can look for and find love, loyalty, ingenuity, forgiveness and ultimately even be inspired by the good in humans as we ponder God’s “mysterious ways.”  By writing for my family and sharing my thoughts with a much wider family group I hope that in some minute way I may be helping to reduce the bitterness in the world and help people to work towards peace and understanding with responsible reporting of the “people’s history”.  As I wrote in this Blog some weeks ago; my Christian values tell me that tolerance is the glue that holds any society together. My book about war began;

Each year the moving Service of Commemoration held at Anzac Cove Gallipoli on 25th April takes place against the gradually changing backdrop of Anzac Cove in Turkey, with a mesmerising change from a dark night sky to a beautiful pink tinged pale blue dawn sky. The gentle lapping of the water and the silent expectation and reverence of the crowd presents an extreme contrast to the scene in 1915 when hell broke loose in that place.

The “trouble in the Balkans” which finally led to the assassination of Austrian Archduke Franz Ferdinand, heir to the Austro - Hungarian throne, in Sarajevo on 28th June 1914 brewed and had many eruptions before the declaration of this first truly global war. The often used term, “trouble in the Balkans” is in itself an expression of the inability of any person to completely understand the complexity of the situation which was partly geographical, partly cultural and partly historical, but was rooted in the legacies of centuries of other wars and unsatisfactory and conflicting peace treaties between the many opponents. It was eventually bound to ignite into uncontrolled chaos and that fateful shot at Sarajevo in 1914 was the trigger that unleashed the horrendous consequences which changed the world forever.

In his speech during the Anzac Day Service in 2014, the Governor General of New Zealand, Sir Jerry Mateparae said; “When we remember our brave forebears we pay them the honour they deserve. It is also a time for reflection on war and its impact. And it is a chance to enlighten new generations about the events that shaped their world, and to encourage them to strive for peace. Looking out from where I stand this morning, it is very moving to see so many people assembled for this Dawn Service and to know Anzac Day services are taking place in many countries throughout the world. The scale of these commemorations shows how deeply people have been affected by what happened here.” During his speech, the Governor General quoted Neill Atkinson, Chief Historian for the Minister for Culture and Heritage, the organisation chosen to plan the Centenary of Anzac Celebrations for New Zealand. Neill Atkinson said: “History is a responsibility we carry with us now and into the future”.

My husband is currently reading a book, entitled “The Great War” written by John Terraine, which was first published in 1965, and he shared this emotional quote from a German man Rudolph Binding (page 46).  Rudolf Binding was born in Basel in 1867. He studied medicine and law before joining the Hussars. On the outbreak of the First World War, Binding, who was forty-six years old, became commander of a squadron of dragoons. Except for a four-month period in Galicia in 1916, Binding spent the whole of the war on the Western Front.  His diary and letters, “A Fatalist at War”, was published in 1927. His collected war poems, stories and recollections were not published until after his death in 1938, rather ironically just before the horror was about to be repeated, although it was actually written by Rudolph on, or very close to, the 11th November 1914 – only about three months after the Great War started and exactly four years before that war ended.  This was written by a German soldier in the context and immediate aftermath of the “First Battle of Ypres”, and at that time British losses alone had reached 89,000 with The Ypres battle alone accounting for 58,000.

Rudolph Binding, in his gloomy billet in Flanders, found time to set his feelings down.  “When one sees the wasting, burning villages and towns, plundered cellars and attics in which the troops have pulled everything to pieces in the blind instinct of self-preservation, dead or half-starved animals, cattle bellowing in the sugar beet fields and then corpses, corpses and corpses, streams of wounded one after another – then everything becomes senseless, a lunacy, a horrible bad joke of peoples and their history, an endless reproach to mankind, a negation of all civilization, killing all the belief in the capacity of mankind and men for progress, a desecration of what is Holy, so that one feels that all human beings are doomed in this war”. Then John Terraine continued; “It is a matter for awe to see how race after race was drawn in”. 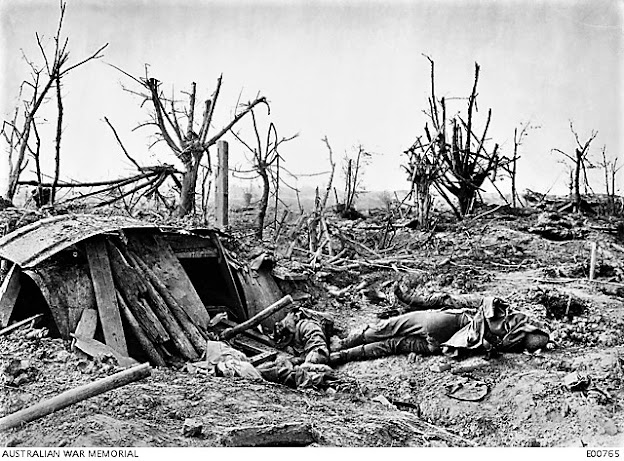 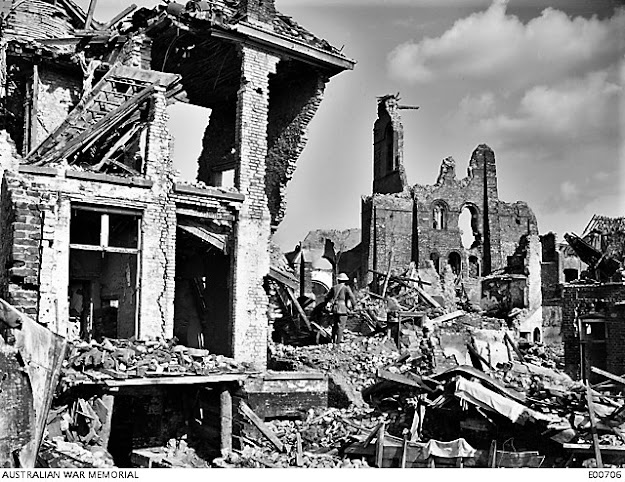 Before 1914 the Great Powers were in two big alliance blocs: The Triple Alliance and the Triple Entente. The Triple Alliance (which consisted of Germany, Austria-Hungary and Italy) later drew in more allies and was joined by the Ottoman Empire (Turkey plus the Middle East) and Bulgaria - its allies were then known as the Central Powers.  The war also quickly involved other countries who joined with the Triple Entente of France Russia and Britain, so the opposing side became known as the Allies and included Serbia, Russia, France and its Empire, Belgium, Montenegro and Britain and its Empire - including self-governing colonies like Canada and Australia.  Italy changed sides and joined the Allies in 1915. Other Allied nations included Portugal, Japan, Greece, Romania, China and, towards the end of the war, various South American countries, including Brazil and Peru. The United States fought alongside the Allies from 1917, but as an ‘Associated Power’ with no formal military alliance.

And what did it all achieve?  Four imperial dynasties—the Habsburgs of Austria-Hungary, the Hohenzollerns of Germany, the sultanate of the Ottoman Empire, and the Romanovs of Russia—collapsed as a direct result of the war, and the map of Europe was changed forever. The United States emerged as a world power, and new technology made warfare deadlier than ever before.  And once again the failure of negotiated Peace, along with the rise of Fascism in Italy, German aggression in Europe, the worldwide Great Depression and the rolling eruption of sniping invasions and unrest throughout the world, the hell of a Second World War was soon killing military persons and civilians in their millions amidst senseless destruction beyond belief.

There is no doubt, without God we humans make a mess of things!  The Rev John said in conclusion; “The Beatitudes call us above all to a sense of openness before God. We don’t see God until we see the face of Christ in others, we learn to do that by pursuing justice and kindness toward all people. We don’t see God until we stop trying to control and begin learning to walk humbly in God’s presence. But when we practice doing justice and loving kindness and walking in humility, the Spirit continues to work in our hearts, purifying us. And blessed are the pure in heart, for they are seeing God.”