No Person is an Island

On Sunday 6th September the Rev. John looked at the human traditions of community in his Reflection and he began by saying; “Solitary experience is contrary to human nature because we are social animals. For all human history life has been lived in the context of communities of one sort or another. This, of course, is simply sociology or anthropology. It is a neutral observation, because communities can be good and bad.”

In the 21st Century there has been a significant interest and practical adoption of social anthropology by much of society.  I have been impressed by the appointment of anthropologists by charities and commercial companies seeking to expand their work into third world countries, while being committed to avoid disruption of the traditions and cultures of those communities.  I know of and commend some great work done by Microsoft Anthropologists to enable third world village women to play a role in supporting their families through culturally acceptable home businesses set up through donations of equipment and training that does not upset the balance of those societies.

The U.K. Economic and Social Research Council promotes the study of Social Anthropology on its website, saying; “Social anthropology plays a central role in an era when global understanding and recognition of diverse ways of seeing the world are of critical social, political and economic importance. Social anthropology uses practical methods to investigate philosophical problems about the nature of human life in society.”

While on a river cruise through Germany about ten years ago my husband and I were taken by bus into the city of Nuremberg for a tour of the city and a visit to the “Documentation Centre”.   We were not really sure what this involved, but were to discover that this is simply a name for their Museum about Nuremberg and the Nazi years.  This name was derived to avoid any possibility of glorifying the Nazi History, but is also supposed to underline the evil past and give no place or focus for neo Nazi’s to enjoy or have as a rally point.

Ninety percent of Nuremberg was destroyed by the Allied bombings so most of the city was built after the end of World War Two with much of it in the very bland 50s and 60s styles of architecture.  Some areas were rebuilt in their original style and look older than they are.

It was hard to know what to expect from our guided tour - but the impressive young guide we had was a sociol anthropology graduate from the local university and his “lectures” were very much based on sociology lines with absolutely no attempt to excuse or avoid the difficult moral issues that must be confronted by German people today.  Obviously, even with all the training in sociology and the attempts to apply all the theories of human behaviour, it appeared that he and the current generations cannot understand or comprehend how a whole generation of good people could have been drawn into such moral destitution that allowed the Nazis to do the terrible things they did.  We had been wondering how a guide could approach the history of Nuremberg for an audience of visitors from several cultures and the attitude of this educated young man filled us with some hope for the future.  We all know the quote by Edmund Burke; “All that is required for evil to triumph, is for good men to do nothing.”

We were surprised to learn that many of the dreaded concentration camps were already in use in the early 1930s and we also learned some of the reasons why Nuremberg, with its central location and long history as a trading centre with successful Jewish traders who had also suffered a terrible massacre in 1298, became of such interest to Adolf Hitler and his Nazis.  Nuremberg was the site of the first German railway and became a huge hub and this contributed to its role as the venue for the huge Nazi rallies from 1927 to 1938.  It was incredible to stand in the vast place where these rallies we have all seen on TV or movies took place. 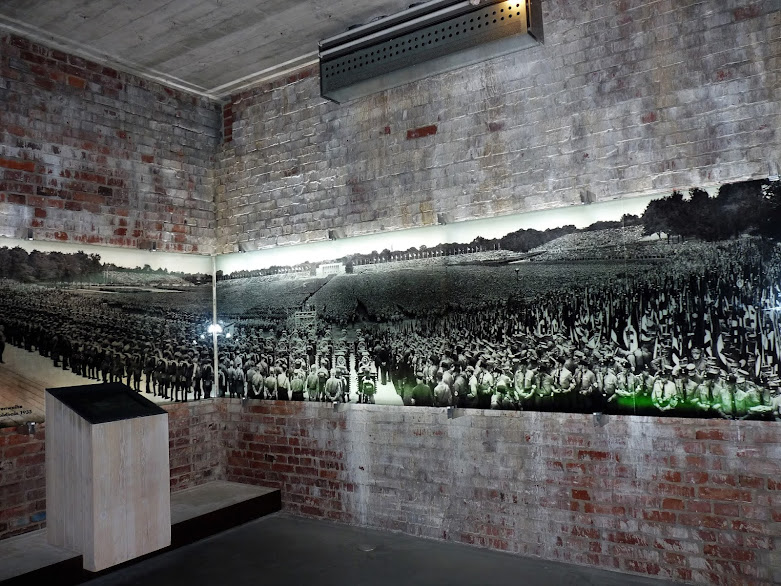 We learned details of Hitler's wild plans and dreams of impressing the world with his might and power and learned how some of those plans were flawed from the start.  In his megalomania he appears through history as a really pathetic figure as you stand and view the failures of his building plans with the evidence of his unfinished projects which he refused to hear just could not work.   We found it quite moving to stand below the windows of Court 61 as we listened to our guide’s descriptions of the Nuremberg Trials that took place there.

I found that in some ways the feelings of the young Germans paralleled with the thoughts of many Australians about the ill treatment of our aborigines – while we don’t feel personally responsible for what was done, we can’t quite understand how other essentially good Australians allowed it to happen.

The Rev. John then spoke of the difficulties we humans have living harmoniously in the communities we crave.  He said; “The bad is easy to recognise, because the history of humankind is as much as anything a history of war and conflict. We read in the record of the past and see in the news of our day that humans have great difficulty getting along with one another—whether it be in the neighbourhood, village, city, state, nation, or world.”

Sadly, there are currently many dangers to the traditions of community looming, as a result of this distracting Covid 19 Pandemic, because the “rules” of keeping people safe from the deadly virus, contravene the way those who “gather together in Jesus’ name” care for each other and share their love of God, their troubles and their triumphs.  Daily we see the tragedy of Christians being locked out of their churches, children being locked out of their schools, workers being dismissed from their jobs, old people being locked in their retirement villages, families kept apart and bosses who have built up businesses and taken satisfaction in knowing they provide security and keep families safe from homelessness, hunger and distress all fall into some level of despair.

Yet it goes much deeper even than that and our feeling of the loss of our freedom threatens all communities and the very ties that hold them together and deliver a measure of good, kindness and justice in our society.

Freedom is; liberty, autonomy, lack of restrictions, self-determination, independence, choice, free will, and sovereignty.  I decided long ago that to live in complete freedom I would need to leave my husband, children and grandchildren, and cut off all ties with friends and neighbours.  I would need to leave all behind and move to a place with no laws or rules; where no one would question any of my actions.  No matter how anti-social or selfish I was, there would be no one to control my dominion or question my rights.

And there would be no one to care!  Yet caring for and being cared for by other humans is one of life’s great rewards and joys.

Do I want freedom if that is the price?  No - I like to be held accountable for my actions; and I consider it my moral duty to obey the laws of Australia and to follow the rules of God as set out in the Bible.  I believe it is a privilege to have a husband and family to share my life, even though this means they sometimes expect me to do something for them in return for the love we share.  I also enjoy being a part of a sociable community.

In order to keep this civilized and enlightened social order that we call society, the enforcement of rules and laws must generally be seen to be the right outcome to preserve the rights of the majority.  It is in fact ironic, that the price for a person who exercises what they may consider to be their personal freedom, in an anti-social way in a “civilised” society, is often punishment by fines or imprisonment, inflicted by that same society.

This of course, brings up questions about the morality of the deprivation of freedom in many specific circumstances.  Particularly in these disrupted times, many previously law abiding but frustrated people are questioning the mandatory removal or suspension of their previously guarded and accepted “human rights” and the right of society to punish them for breaking these “new laws of humanity” being made to protect the life and health of us all – even strangers.  I suppose it is selfishness that stops those who can’t see and understand that to protect their own loved ones and even themselves, they must consider the needs of everyone not only in their own society, but also in other connected societies throughout the world.

The Rev. John said in his sermon; “We do gather in Jesus’ name. We re-call him to presence with us. And that makes him a part of us and of what we do. That is what we experience at each Eucharist—we in him and he in us. But we don’t celebrate Eucharist alone. If only the priest shows up for a mid-week service, for instance, there will be no celebration of the Eucharist. There is no community for whom to break bread.”  This reminded me of an interesting moment in 2011 when my husband and I arrived at a beautiful church in the French village of Bergholtz-Zell very late on a Friday afternoon; after a beautiful day spent looking for the most perfect village along the famous Alsace wine route.

The church is famous for its exquisite wooden carvings, but as we quietly entered, we discovered that the priest was talking to two women in the church and he was ready to start a service where there really were just “two or three people gathered together in God’s name”.  As the service began, I found it both sad and yet lovely to see the fulfilment of this often quoted phrase, although I was a little disappointed to see that the two ladies stood one behind the other in about the fourth and fifth rows back from the priest in the front of the church.   As our understanding of the French language was almost completely non-existent, we quietly left the church and continued on our journey.

The conclusion from the Rev. John was; “Today Jesus makes it clear how important we are one to another. Through our link to one another through Christ, there is a power in our community, uniting the values of God to our values on earth. This is how Jesus enables us to use God’s power for making healing and life-giving love more effective among God’s people. We come together, we stay together, we work together—in our Lord's name, bringing to focus the presence of God and unleashing the power of the Spirit to transform our lives and the lives of all God’s children.

“Where two or three are gathered in my name, I am there among them.”