Walking the Walk   On Sunday 27th September, the Rev. John began his Reflection/Sermon by asking those watching him speaking on Zoom, listening via a telephone link, or reading his words which asked us to “Imagine you are watching television and a commercial comes on” and then he went on to describe an idyllic scene which was cleverly orchestrated to convince the viewers that buying their product would deliver “salvation – buy our product and it will save you from your harried, over-scheduled existence and lead you to this “perfect” life”.

Of course we all know that life is not always perfect, yet each of us must admit that we have sometimes been enticed by clever advertising.  Quite recently, I was convinced by a TV advertisement that a new salted caramel biscuit with a well-loved name and international reputation would be quite delicious – instead I was very disappointed and felt let down and only finished the small but expensive packet of these biscuits to avoid waste.  I suspect the product has not been a great success because, after the initial six to eight weeks of blanket advertising, I have never seen these disappointing biscuits mentioned on TV again.

In the Exodus story mentioned by the Rev. John, the Israelites had no doubt been looking forward to a better and perhaps even “perfect” life as they journeyed out of Egypt, but as we discovered - when things became hard; “The people quarrelled with Moses, and said, ‘Give us water to drink.’ Moses said to them, ‘Why do you quarrel with me? Why do you test the Lord ?’   But the people thirsted there for water; and the people complained against Moses and said, ‘Why did you bring us out of Egypt, to kill us and our children and livestock with thirst?’”

As “The Israelites quarrelled and tested the Lord, saying, ‘Is the Lord among us or not?’” – the majority of us have expressed doubts from time to time when things go wrong.  I feel sure that many distressed people have questioned God about the current Covid 19 pandemic and asked how he could have unleashed such illness and struggle upon the world.

During his sermon, the Rev. John went on to tell us a “modern parable” that described ‘someone’ like we have all seen come to worship at our church and grow in enthusiasm and goodwill, but who gradually found that everything was getting too hard.  Their religious fervour gradually waned, so that they may have slowly drifted away, with us barely noticing that one day they just stopped coming altogether.  The “modern parable”  went on; “He still believed in God and felt love for God but didn’t know how to integrate these pieces into the rest of his life. It all seemed like it was too hard, too much.”

We should wonder why this person did not keep looking for a closer walk with God in our church community and ask; Do we always “walk the walk as well as talk the talk?”

The Rev. John said; “Jesus gives a telling example of response to God’s love in his parable today about the two sons being asked to work in the vineyard. The first son tells his father outright that he won’t do it, but then has a change of heart and goes and does it anyway. Whereas the second son tells his father he will and then never does. It’s a pretty extreme example, but it gets the point across. Jesus tells this to the chief priests and elders – who rejected John the Baptist and were rejecting Jesus – in order for them to be caught in their own web of deceit. Jesus asks them, “Which of the two did the will of his father?” and they know they are trapped because the answer, of course, is the first son. He ended up living his life faithfully; he didn’t just talk about it or say things to appease his father.”

We all have good intentions. But as Jesus teaches us in our gospel reading today, our intentions don’t really matter. It’s our actions that are grounded in and flow from our relationship with God that count – individually and as a community.”

As Christians; perhaps we should encourage the alternate idiom; “Practice what you preach” as a greater motivation than other versions of “Walk the Walk” which is essentially saying “PROVE IT”.  Other such sayings that have great relevance to the expression of our genuine reactions are, “Actions speak louder than words” and “The road to hell is paved with good intentions!”  A different interpretation of that saying is that the difference between what someone intends to do and what they actually do can often be called procrastination.

A few years ago, when my husband and I sorted through some old papers, we unearthed a “to do” list from more than 30 years ago - and the amazing thing was there was absolutely nothing on the long list that still needed to be done, yet not one job had been ticked as completed.  Although we laughed about it and recognised our serious faults of procrastination, we agreed that so called wise quotes are very much like statistics really; you can find one to support almost any argument you wish to make.  I consider myself a reasonably decisive person; however, I can nod my head in agreement with almost all the dozens of quotes on procrastination that I unearthed via Google.  I think the ‘tongue in cheek’ quote; “One of the greatest labour-saving inventions of today is tomorrow”, which is attributed to Vincent T. Foss, perhaps best fits the sad tale of our old unchecked list of jobs.  Although my mother, if she was still with us, would have opted for the often wisely quoted; “Procrastination is the thief of time” theory?  My mother dusted the house and swept the floor each day – it was like a religious ritual.  I have often wondered and imagined how much time would have been saved if she had procrastinated and done it only when her “round tuit” came conveniently to hand.

As we moved our fingers down the lines of writing on our list, we shed tears of laughter as we noted our soft blue British Wolseley didn’t need polishing - there have been around six replacements for that particular car since then.  More good news - the next thing on the list didn’t need doing either – the fuchsia garden that needed weeding and spraying for the black caterpillars that regularly stripped the leaves each time we felt a little smug about how pretty the garden looked, could be crossed off too.  Our daughter’s “new” bedroom was built over that spot some 30 years ago and the rose garden near the back patio didn’t need weeding either.  The sunroom extension was built over that nearly 20 years ago. 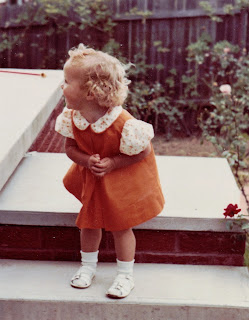 Neither did the wrought iron on the front patio need painting because the lounge room extension covered that patio at the same time the fuchsia garden was lost.   Almost doubled up with laughter, we crossed all the remaining jobs off the list with a flourish, feeling really good about all the time we had saved by not doing those jobs either.  Continuing to build rooms onto the house to avoid weeding the garden or painting, may sound a little extreme but it just goes to prove - if you put some things off long enough you never have to do them at all!

However, the serious, older and hopefully slightly wiser me must now agree with the quote of Edward Young, which my very busy house-proud mother would have approved; “Procrastination is the thief of time; year after year it steals, till all are fled, and to the mercies of a moment leaves the vast concerns of an eternal state. At thirty, man suspects himself a fool; knows it at forty, and reforms his plan; at fifty chides his infamous delay, pushes his prudent purpose to resolve; in all the magnanimity of thought, resolves, and re-resolves, then dies the same."

My reality is; I believe all people who achieve the things that are important to them in life, gain personal satisfaction and harbour warm feelings of fulfilment as well as setting a good example.  It is for each of us to live according to our own truth.

However, I would like to share one final quote that may never make its way into the ‘endless list of quotes on everything’ to be found on the Internet.  It is an often repeated quote from a lady who can always find a reason to procrastinate when there is housework to be done.  If you know me well, you have probably often heard me say: “When I lie on my death bed I will not be saying, I wish I had done more housework!”

Thank you Rev. John for asking us if we are “Walking the walk”; “We say we are Christians, but how do we know? How do others know? God has given us the gift of our lives and we are called to respond.”

https://www.youtube.com/watch?v=pbthcrhrrOU  You may like to click on the link and listen carefully to the words of Hymn 618 TiS.  “What does the Lord Require?” “Do justly; Love mercy; Walk humbly with your God.”