At that time Jesus said, "Father, Lord of heaven and earth! I thank you because you have revealed to the unlearned what you have hidden from the wise and learned." 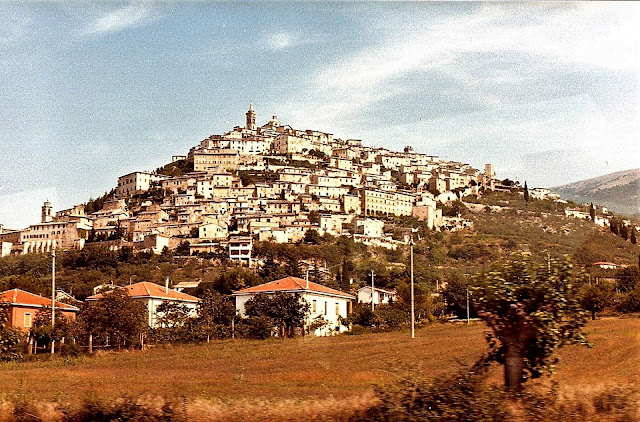 On the closest Sunday to the anniversary of the death of St. Francis of Assisi, the Rev. John’s Reflection/Sermon was focused on him and his life.  But for me - a good quote to begin our own personal review - comes from the summing up at the end of the Sunday Sermon.

“So what are we to make of this famous saint? He has been called "the Other Jesus" by some. He is revered and loved universally, by Christians and non- Christians alike. And yet, he didn't seem to Get it Right.

Perhaps this is what Jesus is talking about when he suggests that the foolish and unlearned may know something that the wise and learned don't know. Perhaps certainty and Being Right are not what Jesus wants from our lives.

Maybe Saint Francis shows us something completely different, something that looks more like perseverance in the face of uncertainty. Maybe the lesson I can learn from Saint Francis is the lesson that faithfulness is more valuable than Being Right; that humility and unknowing are a more appropriate response to God than certainty and knowledge. Perhaps abandoning the pride of self may be the way to begin to understand God. Or, in the words of Saint Francis' famous prayer, that it is in dying that we are born to eternal life.”

It is interesting to consider that perhaps the most famous prayer often attributed to one of the most famous saints is not included in the official “Prayers of St. Francis” of the Franciscan Order, although the prayer has been recommended by members of the order.  The lavish use of the personal pronouns "I" and "me" and the complete absence of the words "God" and "Jesus" are often used as “proof” of a different author.

It is widely thought to be more like the writing of Giles of Assisi (c.1180 – 1262), one of the close companions of St. Francis and has similarities to his “Golden Sayings of Blessed Giles of Assisi.”

St. Francis has been recognised and loved by much of the civilised world going back for many centuries.  He is not just a Roman Catholic saint, but a person with many of the human traits that we can recognise in ordinary people.  His early life was privileged because his father Pietro di Bernardone, was a wealthy and successful cloth merchant who travelled extensively and was in France when Francis was born in 1181/1182.  His was christened Giovanni Francesco di Bernardone, but his father called him Francis and gave him every opportunity to enjoy a carefree “entitled” life with his friends. It seems that young Francis was very popular and seen by his friends to be a happy and carefree person who loved parties.  His first biographer, Thomas of Celano wrote that friends called Francis the “King of Revels”.  He was a great favourite among the young nobles of Assisi and had dreams of becoming a Knight, although he was being encouraged by his father to follow him as a merchant, which was not something he enjoyed.  It is recorded that even as a young man Francis had began to develop an intuitive sympathy with the poor people.

When he was 19 or 20 Francis went off to fight the Perugians in a petty skirmish, but he was taken prisoner and held in captivity more than a year.  After suffering from a fever while captive, he began to turn his thoughts to the emptiness of his life but on recovery he again wanted to have a splendid military career.  So Francis arranged to go with a Knight of Assisi who had agreed to accompany Walter of Brienne, who was known as the “gentle count”, who was supporting the Neapolitan States against the Emperor. The biographers of Francis tell us that the night before he set forth he had a strange dream and heard what he believed to be the voice of God.  In good spirits, Francis started the next day on his journey, but a second illness caused him to stop at Spoleto in Umbria, and in another dream where he said that he heard the same voice tell him to return to Assisi he immediately returned to his home city.

It seems clear that at this point in his life he was touched by the Spirit of God and after a short period of uncertainty, Francis the fun loving “would be” knight turned to serious prayer and sought solitude as he answered his call by giving up his fancy clothes and wasteful ways.  In the reading I have done, a recurring theme developed and Francis began to literally embrace and welcome and even kiss lepers and beggars and give away his clothing and his money.  About this time, he made a pilgrimage to Rome where the horde of beggars at the door of the Basilica caused him to exchange his clothing and stand at the door with the beggars and fast.

Not long after Francis returned to Assisi, the incident described by the Rev. John in his sermon, when Francis was praying before an ancient crucifix at the forsaken wayside chapel of St. Damien’s below the town of Assisi, took place.  Francis heard God’s voice again and he said; “Go Francis and repair my house, which as you see is falling into ruin”.  This event was responsible for panic reactions which resulted in a permanent rift between Francis and his father, who did not forgive his son for rushing off to his shop, and, impetuously taking a load of his materials and also his horse which he rode to a market at Foligno and sold to get the money needed to restore the church.  However, the priest refused to accept the money because of the way it was obtained and Francis hid for a month in a cave near the church to avoid his father’s great wrath, which was not abated at all - even when he got back his money which Francis had thrown down at the feet of the priest.

The stories about the total surrender of all comfort and worldly goods are long and amazing, and soon St Francis who was equally kind to people and animals, was no longer considered to be mad as he wandered the countryside preaching God’s word.  Soon he was being joined by some impressive adherents who joined him and followed his way of life - and the Franciscan order began to spread throughout many countries and his selfless love and service to the poor and the sick people of the world is still reflected in this modern age. 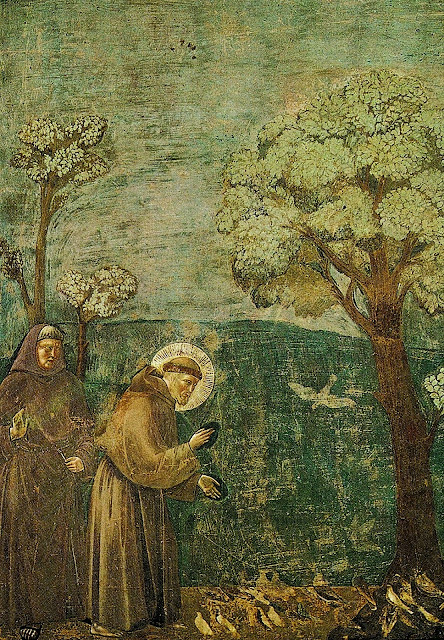 I found this summary about Saint Francis and thought I should share it with you;

St. Francis of Assisi was a unique spiritual personality who gave up a life of wealth and social position to embrace a life of poverty and chastity – With the approval of the Pope, he founded a new Monastic Order, commonly known as the Franciscans. St Francis is considered one of the greatest saints in the Christian tradition and an example of a life lived in imitation of Jesus Christ.

“Most high, all powerful, all good Lord! All praise is yours, all glory, all honour, and all blessing. To you, alone, Most High, do they belong. No mortal lips are worthy to pronounce your name.” – St Francis – Canticle of St Francis 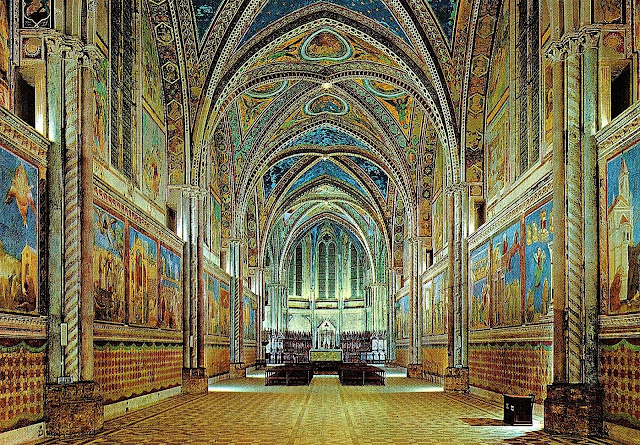 In 1982 my husband and I visited Italy and I was thrilled to be able to go to Assisi and visit the place where St. Francis had discovered God’s Grace and devoted his life to God’s work.  I felt I needed to pinch myself as we stood in the famous Basilica above the steep streets of this beautiful hillside town and looked at the famous frescos of Giotto and other artists who had painted them nearly a thousand years ago.  I still remember the intensity of my art teacher at school as he held up his precious art book to show his students the photos of these wonderful paintings.   St Francis of Assisi died on October 3, 1226 and work on the church was started in 1228, the year of Francis's canonisation, and it was constructed slowly over the next 300 years.  We were very sad when the Basilica was badly damaged by two earthquakes in 1982 and some people died in the Basilica and in the town. 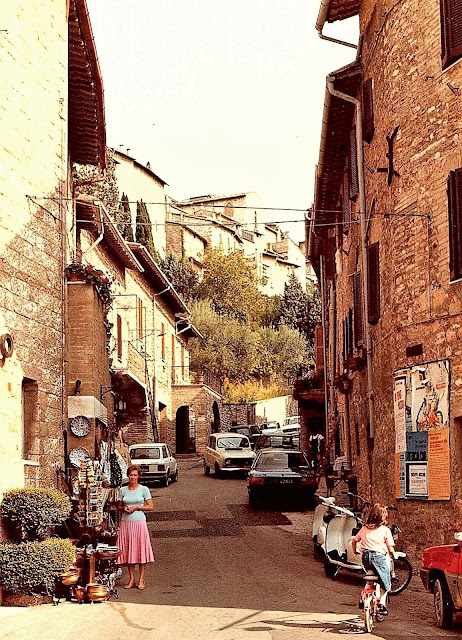 Many times I have tried to understand how St. Francis was able to give up all earthly joy and punish himself for his perceived failings when he led a selfless existence with his every thought devoted to God.  I have to admit that I have often had doubts about God’s expectations and asked myself if God really “requires” us to be miserable.  I think joy is the greatest gift in life we can give and share.