First I want to remind myself and others that in reflecting on Sunday’s sermon about the parable of the talents, our Leader Dermot stressed; that the “timid slave” in the story was to be thrown; ‘into the outer darkness, where there will be weeping and gnashing of teeth’.  He then said; “As a 21st century Aussie. (Inevitably, I read into the parable an idea that we are meant to substitute God for the owner.) This doesn’t sound like the God of grace and love I know.”

Next I want to go straight to the end of the Reflection so thoughtfully delivered (via Zoom) and suggest that Dermot, like some of the rest of us, is perhaps weary of trying to sort out the deep thoughts of 2,000 years of trying to come to terms, with the true messages of God which were recorded as parables and churned over year after year as we try to follow God’s ways and his thinking.

In talking about the parable of the talents Dermot shared his love of sitting quietly away from life’s turmoils and just “being with God” at the place in his life where he is at a particular time.  On this theme he said about Sunday’s Parable of the Talents; “But maybe this parable has a message for us personally and for the church today. Things are changing about us and maybe, in some way, we need to switch off the power which we are using, and glide for a time, trusting that in God’s support we will hear and become aware of new ways of being.”

“And in doing that, we might allow the message of the parable to emerge – let us not hold back on the grace and love of God out of fear for what we have.  Let’s not try to protect the church from the world. Let’s take risks.  As Bill Loader (Rev Emeritus Professor William R. G. Loader BA (Auckl) BD (Otago) Dr theol (Mainz, Germany) FAHA, Emeritus Professor at Murdoch University) points towards – lets ‘allow the life of God to flow through us’. Let’s release the Spirit from any ropes and chains which we place upon it by our own expectations.  Let’s rejoice in the possibilities of the future. God is offering the “talents” – we need to have the courage and love to use them.  Amen”

I have a special memory of a “girlie” afternoon spent with my mother in front of the Kosi coke burning stove, with her patiently teaching me to knit a pink woollen baby bonnet in the popular feather and fan pattern.   It was only due to my mother’s great patience that I had eventually mastered the art of plain and purl knitting so that I could finish my knitted squares with the same number of stitches on each row as I had started off with; Mum was prepared to sit with me and guide my efforts to make something pretty and useful to be sold at the church fete that was planned for the spring.

As I look back at that happy afternoon, I realise that my mother was probably really eager to get back to her own effort for a new church project which was quite innovative and must have been the subject of much vigorous discussion in the St. Andrew’s Strathfield church meetings before the launching of “The Talents Project”.

I was probably about 11 at the time and this idea made quite an impression on me as I heard the ideas and saw the enthusiasm of the people from the church as they took on the responsibility of “looking after” God’s talents and increasing them to be returned with a healthy bonus at the end of the time that had been decided for the church’s chosen project.  I don’t know if everyone started with the same amount of money being ‘given’ by the Parish Council, but I do remember that my mother had an amount of ₤5; which in the 1950s was $10 of today’s money, although the buying power of that amount was considerably greater.  However, I do remember that if you wished you could keep ‘investing’ your profit to become appreciated as a “good and faithful servant/slave”.

Certainly there was no talk of being “thrown into outer darkness or weeping and gnashing of teeth” if your enterprise failed; although I did wonder if some lazy ‘slaves’ took the easy way out and just made a donation at the end so they would not be seen by their peers to have failed.

For many of the church congregation it was an exciting time of sharing their gifts or talents and buying and selling all kinds of products as they contributed to the overall project.  There was much interest in the sweet little 4 or 5 cm ‘baby’ dolls which my mother bought by the dozens and dressed in perfectly scaled baby dresses with ribbons, lace and embroidered rosebuds.  The dolls also had little pink or blue jackets, bootees and bonnets with narrow ribbons and they were very much in demand.  Some of the dolls were dressed in complete miniature knitted layettes and it was good to watch my mother’s pleasure as her “talents” were recognised.

My father was away in the navy at the time so my mother enjoyed “playing” with her lovely little dolls and it was good to see her excitement as her project grew, although I cannot remember the amount of profit she actually made for the chosen project.

The memory of that “girlie” afternoon with mum is still quite vivid so that I can almost feel the warmth and the sensation of safety and protection as my 11- year- old self looked out the window at the wind-blown garden, now being soaked with icy rain.  We were certainly not rich – but it was a comforting feeling to know that we had enough of everything needed for our family – with just a little to share with others who had less.

This was about the time I began to realise that some kids did not have all the advantages that my brothers and I enjoyed.  My brother John had one friend whose father was a cranky drunk who abused his mother - and he had another friend who was one of 13 children.  In his home there was not nearly enough money coming into the house to feed and clothe them all properly and sometimes his friend had to stay home while his pants were washed and he often had bare feet.  So the church project was a timely lesson in the satisfaction of using your gifts to help people in need. 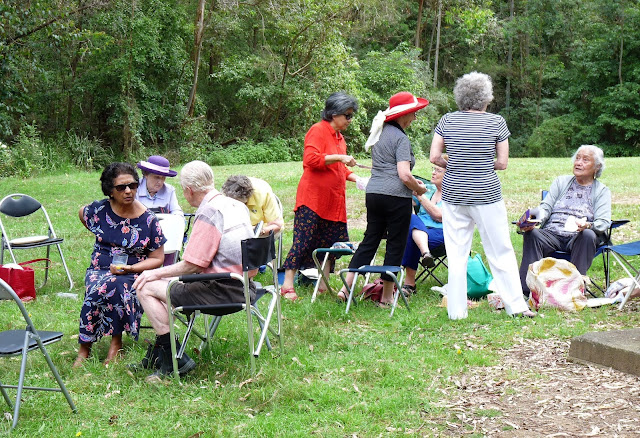 Good News!  I am happy to say that Margaret has now come home from hospital and rehabilitation and after three operations and many months of tedious recovery she is beginning to feel much stronger.  On Tuesday, she and her husband were even able to join a group of around twenty Marsden Road Church members for a casual picnic lunch in a local park.  I am so grateful for the way hospitality and friendship has survived and grown during the difficult times for our close church community. 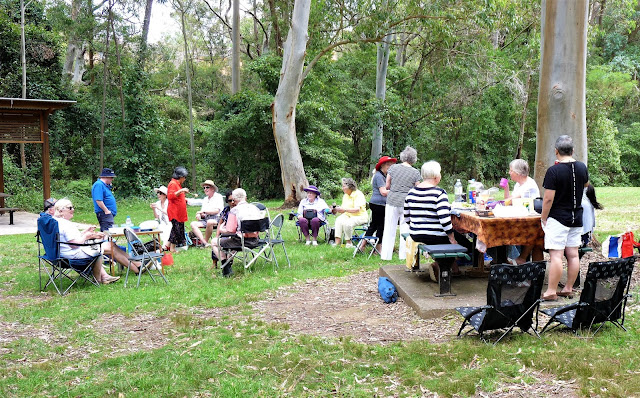