The service this Sunday morning was one of those magical times when we all left the service feeling that God was really there with us – yes even online there was a magic glue that held all the elements of the service together to highlight the messages of the service in a way no one person could have foreseen.  I just love it when this happens and I am sure it happens sometimes for just one or two people and that is important - but sometimes it is so obvious we all share the magic.  As the service unfolded we heard from Davyn from the Parramatta Mission who was to have visited Marsden Road Uniting Church in March to tell us about the joy that had been shared when around 700 people had joined together at the mission for Christmas dinner in 2019.  Many “dinner plates” had been donated by people from our church family and we were eager to hear the good news story of God’s love being shared as people in need were fed and welcomed with love.

Then came “the virus” and almost every plan was disrupted. For so many essential charities who struggle to care for increased numbers of people in need, the challenges have increased and the environment has become more trying.

However, finally Davyn was able to join us online this Sunday morning and he shared the joy of last Christmas and the plans being prepared for this rather different Christmas.  We were all moved by the story he told of one lady he met at lunch, who has now been associated with the mission for more than 20 years; after having met Jesus there as a destitute woman who had been homeless and dependent on drugs which she was introduced to in her home at the age of 12.   Davyn told us that on hearing her story last year his Christmas became extra special – he said he felt as excited as he had been at Christmas when he was a young child.  As he watched this changed lady sitting and talking to a homeless lady and passing on the hope that Jesus had brought to her life years ago, he felt overwhelmed to watch God’s love and hope at work.

At the Parramatta Mission this Christmas, there are some wonderful plans being organised to once again be able to spread hope and joy - while following “virus rules”.  There will be no lunch for 700 people, but homeless people will be “pampered” for two weeks with haircuts and other grooming and well-being appointments, medical help and “Meaningful Gifts” – which are virtual gifts that supporters of the work of the mission can give to their family and friends who will receive a card describing their gift and the boost to the self-respect and hope the actual gift will bring to the homeless person or other person in need who will actually receive the gift.

https://www.parramattamission.org.au/  You might like to look at the Parramatta Mission Website and “buy” a virtual gift you could give to someone “who has everything” and may enjoy together, sharing with someone who needs it much more.

The magic continued to build as the Rev. John read the well-known Gospel reading from Matthew 25 as a prelude to his Reflection/Sermon;  “… for I was hungry and you gave me food, I was thirsty and you gave me something to drink, I was a stranger and you welcomed me, I was naked and you gave me clothing, I was sick and you took care of me, I was in prison and you visited me.”

“God equips us with the gifts and not all of us have the same gifts, but all of us have gifts important to God. The life of faith is about finding and using these gifts to carry on Christ's work in the world.

Yet often it seems to be just too much. There are too many hungry and poor and lonely people for us to make any difference.”

Because of the “magic” I was feeling - I watched Davyn’s face and could tell that he was getting excited about the way this so long delayed service had been arranged on just the right day and was giving us all the inspiration that could just help to make this Christmas very special for the strangers, the prisoners, the poor and the hungry and lonely people.

In his Sermon the Rev John asked the question; “What is the ministry of the laity?” and he gave us the answer; “The ministry of lay people is to represent Christ and his Church; to bear witness to him wherever they may be; and, according to the gifts given to them, to carry on Christ's work of reconciliation in the world; and to take their place in the life, worship, and governance of the Church.  ...according to the gifts given them …  Yet often it seems to be just too much. There are too many hungry and poor and lonely people for us to make any difference.”  Of course we have all felt and expressed the frustration of feeling inadequate when it comes to making a difference to a bad situation.

Then the Rev. John told a story about a young boy who was working hard at the beach at dawn to save thousands of starfish that had been stranded on the beach during the night – a good story to inspire us to at least try and make a difference to someone and to show us that if we do nothing – nothing will happen; but if we stand on the beach and throw back some starfish before the sun comes up and they die on the beach – we will have made a difference to those few that we saved.  I could see that Davyn and all the other listeners in the Zoom Gallery were inspired to do something to make those in trouble safer.

As at 13 November 2020 there were 12,866 inmates in full-time custody in NSW prisons and in-person family visits have been suspended since March to ensure the safety of staff and prisoners.  This strategy has worked, with only one confirmed case in the prison population – yet what has been the mental cost?  Coincidentally it was announced that Covid-Safe In-person visits would commence from the next day, the 23 November 2020.  I did not hear about this on the TV, the radio or the news this week – I asked Google!

Along with renewed optimistic reports of advances in the science and the production of covid 19 vaccinations as this week has advanced; there have been other more widely rejoiced changes to the government’s covid “rules” and other positive signs to bring hope to people in need of relief of all kinds.

Since March my husband and I have particularly mourned the death of three beautiful gentlemen – all in their 10th decade.  Although they did not know each other, each has at times been part of our lives or part of an extended family through marriage.  I was very sad when a beautiful man from our little church died quite early in the piece when a total of only five people, plus the minister and the funeral people could attend a funeral - because we all wanted to celebrate and share his funeral with his family – we are a Church Family at Marsden Road Church.  So all I could think to do to share the feelings of our Church Family was to go to the church when the door was closed at the appointed time and keep an informal prayer vigil while strolling back and forth along Marsden Road as the traffic rushed noisily past.

The second funeral we attended was on-line and took place in Victoria during the recent sad “second wave” outbreak and even the man’s sisters were unable to be among the 10 people who could attend.  Shortly after the service started, the streaming was interrupted and after looking at a blank screen for some minutes the first part of the service was repeated.  Then, just as the eulogies and the family photo presentation were to begin, the streaming failed altogether and we were left with the sad frozen image of those ten people who were sitting apart and uncomforted in the family church in Victoria that their 96 year old father had helped to plan and build.

Yesterday under the new “rules” which allow up to 100 people suitably separated, to attend a funeral, I was able to attended my first Covid-Safe funeral at Eastwood Uniting Church.  It was such a relief to be allowed to be in the presence of the family as they celebrated the life of their beautiful kind and loving 93 year old father, grandfather, great-grandfather and friend of many people the family would not under the previous “rules” have even known admired and cared for him and supported them in their sadness.

A great-grandson of around 11 years old read a version of Isaiah 40:28-31 which I cannot identify, but I just loved to hear those words coming from the child, who will hopefully inherit the strength of character and kindness of his great-grandfather even if his memory of him grows faint with time.

“Don’t you know? Haven’t you heard? God doesn’t come and go. God is Creator in all you can see and imagine. God doesn’t get tired, doesn’t pause to catch breath. God knows everything, inside and out.  God energises those who get tired, gives fresh energy to dropouts.  Because even young people tire and drop out, young people in their prime stumble and fall.  But those who wait upon God get fresh strength.  They spread their wings and soar like eagles.  They run and don’t get tired.  They walk and don’t lag behind.” 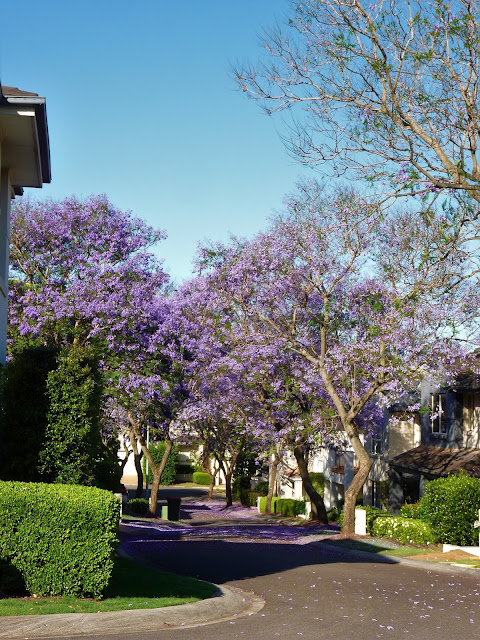 As this week has moved on - my heart has certainly been touched by the possibilities of 2021 being a better and safer year in Australia and hopefully in the whole world.  As I went for my walk yesterday afternoon and looked again at all the lovely jacaranda trees I wrote about a couple of weeks ago in the Blog, it reminded that God is not hiding – we can see and share his glory everyday – but we humans are sometimes too busy to stop and look; so today I took my camera on my walk and several people stopped to talk and admire the beauty of the world with me and we shared just a few minutes of simple joy. 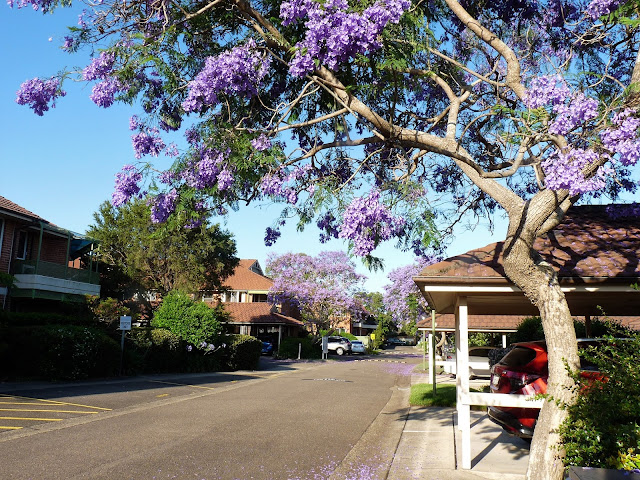